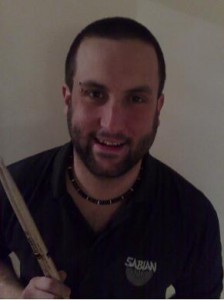 Jim began playing the drums at the age of 14. (Having a bedroom in the attic just about made life bearable for the rest of his family!). He took lessons himself from session drummer Mike Acciaioli for four years before leaving for University in Exeter. Within those four years, Jim had played at school concerts, recorded an EP with his band, and begun tutoring for the first time- initially just to friends who wanted to learn, but later with pupils to whom he had been recommended.At university, Jim joined local band Countermeasure, headlining gigs and festivals across the Westcountry, whilst tutoring his fellow students at the university practice rooms. Following the breakup of Countermeasure, Jim played in various other bands in the Exeter area, becoming a fixture in the local music scene. He also sang and played bass guitar for a short period, but just couldn’t stay away from the drums! Still tutoring in Exeter after university, he moved to Plymouth in 2006 where he continues to play and teach.

When not drumming, Jim’s interests are football (he is a Plymouth Argyle season-ticket holder, for his sins), rail history, walking and film.